Here is upcoming Arsenal FC match schedule (fixtures) as below: 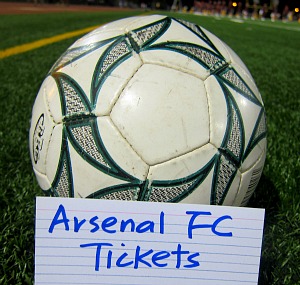 Price for the Gunnars football match tickets is shown in either GBP or EURO.

Update on December 2012:
Arsenal FC had been drawn to face Bayern Munich at Allianz Arena and Emirates Stadium for the 2012-2013 Champions League knockout round.

Arsenal Football Club is the most talented & exciting football team with 13 English Premiership Champions and 10 FA Cups in the English football history, this football club was known as the first team that winning Barclays Premier League crown without losing a single match and finishing undefeated record by the end of 2003-2004 season.

Founded in 1886, the nickname of Arsenal football club is called "Gunners". Gunnars football match would be played at Emirates Stadium, London.

Mr. Wrenger is known as the manager who invested in youth football development, he found a lot of young guns like Theo Walcott or Van Perse, also watch for future superstar Jack Wilshere, his Gunners are strong enough to challenge Manchester United, Chelsea, Liverpool and other European football powerhouses.

Arsenal FC were the first football team from London to earn their trip to the 2005-2006 UEFA Champions League Final; unfortunately they lost to FC Barcelona. Find out about UCL tickets for Barca vs Arsenal.

SoccerTicketShop acts as an intermediary between buyers and ticket sellers (defined below) to facilitate the purchase and sale of Gunners soccer tickets, and as such is not directly involved in the actual ticket sale transaction between the buyers and TICKET SELLERS. All sales are final. As tickets sold through this SITE are often obtained through the secondary market and prices are determined by the individual ticket seller, the prices for tickets may be above or below face value.