Here is upcoming UEL match schedule as below. 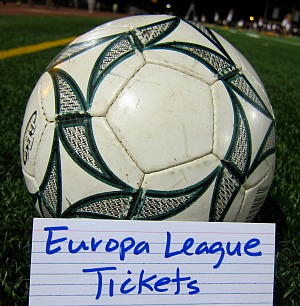 Note: Price for the UEL Cup soccer match tickets is shown in either GBP or EURO. There are no hidden booking fees, no service charges and no other fees but shipping charge which is sometimes free when self collection is available.

The Guide to Europa League Tickets

UEFA Europa League (UEL Cup) is the second most important football competition for European football clubs who are unable to qualify for Champions League.

Starting the 2014-2015 season, any team who win Europa League championship in order to automatically qualify for UEFA Champions League competition.

They traditionally have draws for 16 Rounds, QuarterFinal (QF) and SemiFinal (SF) matches.

If you want to shop for Europa League match tickets in another language, see below.

SoccerTicketShop acts as an intermediary between buyers and ticket sellers (defined below) to facilitate the purchase and sale of Europa league soccer match tickets or UEFA Cup ticket, and as such is not directly involved in the actual ticket sale transaction between the buyers and TICKET SELLERS. All sales are final. As tickets sold through this SITE are often obtained through the secondary market and prices are determined by the individual ticket seller, the prices for tickets may be above or below face value.