Here is upcoming Club Brugge schedule as below: 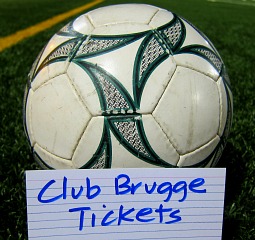 Note: Price for Club Brugge soccer match tickets is shown in either GBP or EURO.

Club Brugge KV, known as "Brugge", founded in 1891, is a Belgian professional football club based in Brugge where it's about 55 minute train to arrive from Brussels.

Club Brugge is still one of the strongest soccer teams in Belgium based on won - loss records and European competition records.

Brugge currently holds the record where they had played in the UEFA Cup competitions for 16 times in a row. Also they have made their first historic trip to the 1978 European Cup final, unfortunately they lost to Liverpool FC.

They currently maintain the 4-decades football rivalry with RSC Anderlecht, and also engage "Brugge Derby" rivalry with Cercle Brugge KSV as well as another rivalry with crosstown rival KRC Gent.

SoccerTicketShop acts as an intermediary between buyers and ticket sellers (defined below) to facilitate the purchase and sale of European football match tickets, and as such is not directly involved in the actual ticket sale transaction between the buyers and TICKET SELLERS. All sales are final. As tickets sold through this SITE are often obtained through the secondary market and prices are determined by the individual ticket seller, the prices for tickets may be above or below face value.