Prices for the Portugese soccer team tickets are shown in EURO.

Even CR7 had knee injury and had to leave the Euro 2016 final match with 25th minute of first half, but his teammates kept playing well as a team and continued to keep 0-0 until the extra time, it turned out they had a lucky night, Eder scored a winning long-range goal to shun France, successfully claimed  the  Euro 2016 championship crown. That's Portugal's first historic major tournament trophy, and that's Ronaldo's first international trophy too. Congrats to Portugal and CR7.

I think Portugal seems to have a lucky knock-out path thru this European football tournament, they managed to beat Croatia, Poland, and Wales before facing France in the final, because they did not have to face european giants such as Spain, Italy and Germany. 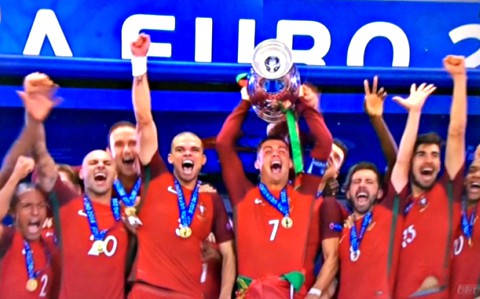 Update on January 2012:
Portugal had been drawn into the same group of 2014 FIFA World Cup qualifiers with Russia, Israel, Northern Ireland, Azerbaijan, and Luxemborg.

Update on December 2011:
Portugal had been drawn into the Group B of Euro 2012 Championship with Germany, Netherlands and Denmark.

The Guide to Portugal Football Tickets

Portugal is scheduled to host their international football matches at their home venue called "Estadio do Sport Lisboa e Benfica".

3 of the greatest soccer players in Portugal are Eusebio, Figo and Cristino Ronaldo.

SoccerTicketShop acts as an intermediary between buyers and ticket sellers (defined below) to facilitate the purchase and sale of international football match tickets, and as such is not directly involved in the actual ticket sale transaction between the buyers and TICKET SELLERS. All sales are final. As tickets sold through this SITE are often obtained through the secondary market and prices are determined by the individual ticket seller, the prices for tickets may be above or below face value.