PSG tickets are available for sale.

Here is upcoming Paris Saint Germain schedule as below: 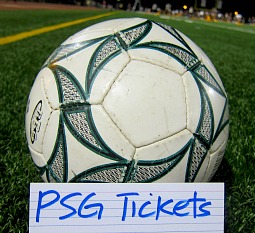 Update on August 2012:
PSG had been drawn into the same group for Champions League with Benfica, Olympiakos and Anderlecht.

Update on December 2012:
PSG had been drawn to face Valencia for the 2012-2013 Champions League knockout round.

Update on August 2012:
PSG had been drawn into the same group for Champions League with FC Porto, Dinamo Zagreb and Dynamo Kiev.

The Guide to PSG Tickets

PSG traditionally engages the toughest rivalry with Olumpique Marseille (OM). This soccer rivalry is known as ("Le Classique" in French is same as   "Derby de France" in English).

As for shopping for PSG match tickets in French, visit Billets de PSG.

For more details on PSG.

SoccerTicketShop acts as an intermediary between buyers and ticket sellers (defined below) to facilitate the purchase and sale of tickets for soccer matches in Paris, and as such is not directly involved in the actual ticket sale transaction between the buyers and TICKET SELLERS. All sales are final. As tickets sold through this SITE are often obtained through the secondary market and prices are determined by the individual ticket seller, the prices for tickets may be above or below face value.