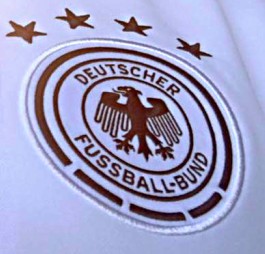 Price for the Germany international soccer match tickets is shown in either GBP or EURO.

Update on July 2014:
German finally became the third team to win FIFA World Cup championship titles for more than 3 times. They kept playing well to beat Argentina 1 - 0 in overtime and secured 4th FWC titles. Congrats to Germany national team. Also they were so impressive to blow away the host nation Brazil 7 - 1 in the semi-final match.

Update on January 2012:
Spain had been drawn into the same group of 2014 World Cup Qualifiers with Sweden, Ireland, Austria, Kazakhstan and Faroe Islands.

Update on December 2011:
Germany Euro 2012 had been drawn in the same group B for Euro 2012 tournament with Holland (Netherlands), Denmark and Portugal.

The Guide to Germany Football Tickets

From 1950 to 1990, the team was called West Germany in English, as since World War II, the DFB is based in the Federal Republic of Germany (FRG) which was commonly referred to as West Germany from 1949 to 1990. The DFB continues to field the German national team that had been fully reinstated by FIFA after the 1950 FIFA World Cup, retaining all records and traditions. Under Allied occupation and division, two other separate national teams had also been recognized by FIFA, the Saarland team (1950–1956), and the East German team (1952–1990). Both have been absorbed into the current national team, along with their records (caps and goal scorers).

Germany is one of the three most successful national teams at international competitions, having won a total of three World Cups and three European championships. They are also one of the most consistent teams. Aside from winning three world and continental titles, they were also runners-up three times in the European Championships. Germany has a long history of soccer rivalries with England, Argentina, Italy and Netherlands.

As for Germany soccer tickets in another language - fussballtickets (German).