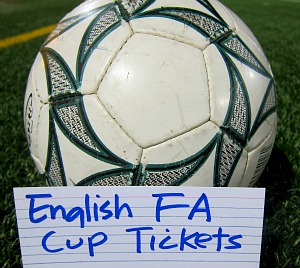 Price for the FA Cup football match tickets is shown in either GBP or EURO.

Note: They offer short side, long side and club level corner blocks available. There are no hidden booking fees, no service charges and no other fees but the shipping charge is sometimes free when self collection is available.

Wembley Stadium London UK is where the traditional FA Cup Final be hosted on May (second Saturday of May).

FA Cup is a knockout round-by-round football competition in England, and is the oldest club football tournament since 1871. FA Cup is totally different from the Premier League or regular season football league. FA Cup match would be scheduled traditionally as the last match of English football season.

The simple fact is if you lose a FA Cup match, you are out! if you win, you are going to be in next round. That's why every FA Cup match is more exciting and passionate! anything could happen on the football field and the results on FA cup football matches are sometime surprising! The most surprising moment in FA Cup history was Sunderland beat Leed United to claim the 1973 FA Cup crown when Sunderland was in second tier League and Leeds United was in first tier League.