Here is upcoming Sport Lisbon Benfica soccer schedule as below: 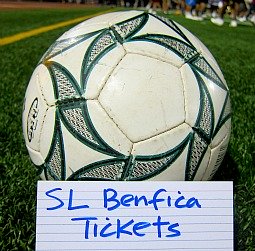 Prices for the SLB football match tickets for Portuguese Liga and UEFA Champions League (UCL) or Europa are shown in EURO.

Update on May 2013:
Benfica will meet Chelsea FC for the 2013 Europa League championship final at Amsterdam, Netherlands on 15 May. This is second time since the day Chelsea beat Benfica for the 2012 UCL quarter-final matches.

Update on August 2012:
Benfica had been drawn into the same group for Champions League with FC barcelona, Spartak Moscow and Celtic.

The Guide to SL Benfica Tickets

Sport Lisbon e Benfica, really a legendary football club that is known by people all over the world. Founded in 1904 in Lisbon, Portugal, known as Benfica or SLB, is one of the most successful Portuguese football teams to date.

As for Benfica soccer tickets in another languages - find out about Billets SL Benfica (French), Bihetes SLB (Portuguese), and Entradas SL Benfica (Spanish).

SoccerTicketShop acts as an intermediary between buyers and ticket sellers (defined below) to facilitate the purchase and sale of Portuguese football tickets, and as such is not directly involved in the actual ticket sale transaction between the buyers and TICKET SELLERS. All sales are final. As tickets sold through this SITE are often obtained through the secondary market and prices are determined by the individual ticket seller, the prices for tickets may be above or below face value.