SSC Napoli tickets are available on sale. Price for the SSCN soccer match tickets is shown in EURO.

Here is upcoming SSC Napoli schedule as below: 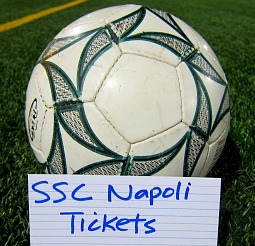 Update on August 2017:
SSCN had been drawn into the same group for Champions League with Manchester City FC, Feyenoord Rotterdam, and Donetsk.

Update on August 2013:
Napoli had been drawn into the same group for Champions League with Arsenal, Marseille, and Borussia Dortmund.

The Guide to SSC Napoli Tickets

SSC Napoli (Societa Sportiva Calcio Napoli), is a professional Italian football club based in Naples, Campania and is currently ranked among the top Italian football clubs of the world. Napoli was formed in the year 1904 and has won the Coppa Italia in their home country 3 times. Their home soccer match stadium is Stadio San Paolo.

Also Napoli have another "Derby delle due Sicilie" soccer matches with Palermo.

Find out about Bigletti SSC Napoli.

SoccerTicketShop acts as an intermediary between buyers and ticket sellers (defined below) to facilitate the purchase and sale of SSC Napoli soccer tickets, and as such is not directly involved in the actual ticket sale transaction between the buyers and TICKET SELLERS. All sales are final. As tickets sold through this SITE are often obtained through the secondary market and prices are determined by the individual ticket seller, the prices for tickets may be above or below face value.