2018 UEFA Europa League final match is scheduled to be hosted at the Parc Olympique Lyonnais, Lyon. France on 16 May. 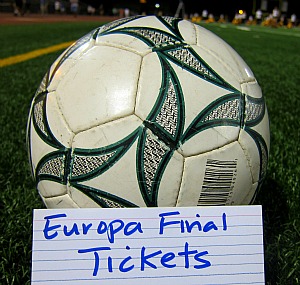 Price for the UEL Cup final match tickets is shown in either GBP or EURO.

The Guide to Europa Final Tickets

As for the fans who experienced in watching European Cup or Club Winner Cup final match LIVE in past seasons, they would say watching UEFA Europa League final live match then penalty shoot-out at end of extra time was really more than worth the money they spent!

If you want to be one of those lucky ones who can experience the tremendously exciting Europa Final live, purchase your Europa League final tickets here online and have the privilege to be at the stadium to watch the Europa Final match LIVE!

Winner of UEFA Europa final will be automatically qualify for next season's Champions League compeition.

SoccerTicketShop acts as an intermediary between buyers and ticket sellers (defined below) to facilitate the purchase and sale of Europa League Final football match tickets or UEFA Cup Final ticket, and as such is not directly involved in the actual ticket sale transaction between the buyers and TICKET SELLERS. All sales are final. As tickets sold through this SITE are often obtained through the secondary market and prices are determined by the individual ticket seller, the prices for tickets may be above or below face value.