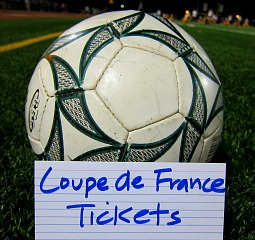 Price for the French Cup football match tickets is shown in either EURO or GBP.

French Cup (Coupe de France) is a single-game knockout football competition in France since 1919, this playoff competition is organized by the French football federation. If they lose, their French Cup dream would be gone, if they win, they'll play in next round, if they tie in extra-time, the penalty shootout will be used to determine winner, that's why French Cup football matches had been so exciting!

As for tickets for French Cup in French > billets Coupe de France.

SoccerTicketShop acts as an intermediary between buyers and ticket sellers (defined below) to facilitate the purchase and sale of French Cup football match tickets, and as such is not directly involved in the actual ticket sale transaction between the buyers and TICKET SELLERS. All sales are final. As tickets sold through this SITE are often obtained through the secondary market and prices are determined by the individual ticket seller, the prices for tickets may be above or below face value.