Portuguese Liga tickets are available for sale. Price for the Liga Zon Sagres soccer league tickets is shown in either GBP or EURO.

Here is upcoming Primeira Liga schedule (timetable) as below: 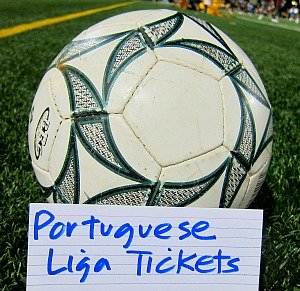 Price for the Portuguese (Liga Zon Sagres) soccer league tickets is shown in either GBP or EURO.

The Guide to Portuguese Liga Tickets

The Primeira Liga, currently named Liga ZON Sagres after their main sponsors, is the top tier in Portuguese club football. Its current champion is Sport Lisboa e Benfica. It also has a European ranking of sixth by UEFA's ranking of 2011.

The Liga ZON Sagres is presently contested by 16 clubs each season, but only five of them have won the title. Currently in its 76th edition (counting four provisional championships in the 1930s) the competition is dominated by the nicknamed "Big Three": (Futebol Clube do Porto, Sport Lisboa e Benfica and Sporting Clube de Portugal), who have a total of 74 titles.

SoccerTicketShop acts as an intermediary between buyers and ticket sellers (defined below) to facilitate the purchase and sale of football event tickets, and as such is not directly involved in the actual ticket sale transaction between the buyers and TICKET SELLERS. All sales are final. As tickets sold through this SITE are often obtained through the secondary market and prices are determined by the individual ticket seller, the prices for tickets may be above or below face value.