Here is upcoming Sporting Clube de Braga schedule as below: 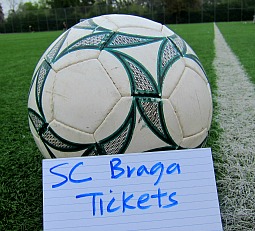 Price for the Sporting Clube de Braga match tickets is shown in EURO.

Update on August 2012:
SC Braga had been drawn into the same group for Champions League with Manchester UTD (MUFC), Galatasaray and CFR Cluj.

The Guide to SC Braga Tickets

Sporting Clube de Braga, (SC Braga), is one of Portuguese professional football clubs, from the city of Braga. They currently compete at the AXA Stadium, also known as The Quarry, which was built for UEFA Euro 2004. This soccer team gradually became one of Portugal's most successful clubs after the Big Three in early 2000s, and they have also competed with some success in European competitions, winning the last ever UEFA Intertoto Cup in 2008 and reaching the final of the UEFA Europa League in 2011.

After finishing 2nd in 2009-10 Portuguese Primera Liga, SC de Braga achieved a place in the group stage of the UEFA Champions League for the first time in its history by beating both Celtic FC of Scotland and Sevilla FC of Spain.

Ticket demands should be very high whenever FC Porto or SL Benfica or SCP Lisbon comes to Braga's home stadium.

As for Sporting Clube de Braga tickets in another langages: Entradas, Billets, and Bilhetes.

SoccerTicketShop acts as an intermediary between buyers and ticket sellers (defined below) to facilitate the purchase and sale of Sporting Clube de Braga match tickets, and as such is not directly involved in the actual ticket sale transaction between the buyers and TICKET SELLERS. All sales are final. As tickets sold through this SITE are often obtained through the secondary market and prices are determined by the individual ticket seller, the prices for tickets may be above or below face value.