PSV Eindhoven tickets are available for sale. Price for the PSV soccer match tickets is shown in either GBP or EURO.

Here is upcoming PSV Eindhoven schedule as below: 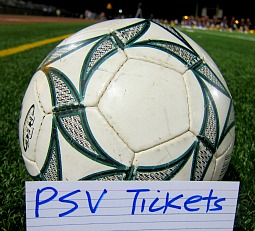 The Guide to PSV Eindhoven Tickets

Philips Sport Vereniging (PSV), is one of Dutch professional football clubs based in Eindhoven, Netherlands.

PSV is known as one of three European Cup winning football clubs in the Netherlands, the other two being AFC Ajax, their arch rivals, and Feyenoord. The club won the European Cup in 1988 (against Benfica) – making them the second Dutch club after Ajax to win The Treble – and the UEFA Cup in 1978 (against SC Bastia). They are often nicknamed Boeren (Dutch for farmers/peasants) in reference to their original provincial city origins and they won the national football league over 20 times.

Found in 1913, PSV's home game venue is Philips Stadion, Eindhoven where its about 35,000 fans could attend.

Both Ajax Amsterdam and Feyenoord are PSV's long-history arch-rivals, either of them comes to Philips Stadion, all tickets for PSV vs either Feyenoord or Ajax always had been sold-out by kick-off time. Shop early and secure your tickets.

PayPal MasterCard or credit card or debit card is accepted for your event ticket purchase.

As for PSV tickets in French, visit Billets PSV Eindhoven.