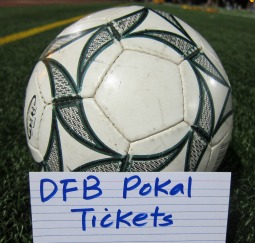 Price for the DFB Pokal soccer match tickets is shown in EURO.

The Guide to German Cup Tickets

DFB Pokal, (German Cup in English), is a single-football match elimination competition in Deutschland every season. This competition began in 1935, all professional soccer clubs from Bundesliga I and II are invited to partipicate in this football cup tournament.

This German Cup is completely different than Bundesliga, if you lose, your German Cup dream would be over! If you win, you continue to compete in next round, that's why DFB Pokal matches always had been so exciting!

If anybody would win DFB Pokal championship. Of course, winner of German Cup Final would automatically qualify for UEFA Europa League competition.

Bayern Munchen currently lead the most DFB Pokal championships (total 15 titles) as for the end of 2010 - 2011 German football season.

SoccerTicketShop acts as an intermediary between buyers and ticket sellers (defined below) to facilitate the purchase and sale of DFB Pokal tickets or German Cup final tickets, and as such is not directly involved in the actual ticket sale transaction between the buyers and TICKET SELLERS. All sales are final. As tickets sold through this SITE are often obtained through the secondary market and prices are determined by the individual ticket seller, the prices for tickets may be above or below face value.