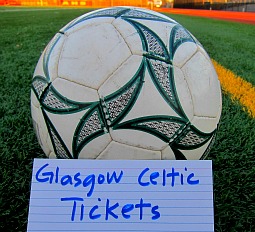 Price for the Celtic football match tickets is shown in either GBP or EURO.

Update on August 2017:
Celtic had been drawn into the same group with Bayern Munich, PSG, and RSC Anderlecht.

Update on August 2013:
Celtic had been drawn into the same group for Champions League with FC Barcelona, AC Milan and Ajax.

Update on August 2012:
Celtic had been drawn into the same group for Champions League with FC barcelona, Benfica and Spartak Moscow.

Celtic Football Club, a Scottish professional football club based in the Parkhead area of Glasgow, which currently plays in the Scottish Premier League. The club was established in 1887, and played its first game in 1888.

Celtic have won the Scottish championship on 42 occasions, most recently in the 2007/08 season, and the Scottish Cup 34 times. Celtic's home stadium is Celtic Park, the biggest football stadium in Scotland, with a capacity of 60,832.

In 2003 Celtic reached the UEFA Cup Final, where they lost 3–2 to FC Porto. Over 80,000 Celtic supporters travelled to Seville, despite many lacking match tickets. Celtic fans received awards from UEFA and FIFA for their behaviour at the match.

Celtic FC was estimated to have a fan base of nine million people, including one million in North America as of April 2008.

As for Celtic football tickets in another language - billets (French).