Here is upcoming Borussia Dortmund match schedule as below: 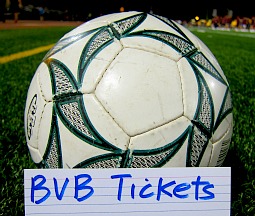 Price for the Borussia Dortmund soccer match tickets is shown in EURO.

Note: There no hidden booking fees, no service charges and no other fees but the shipping charge is sometimes free when self collection is available.

Update on April 2013:
BVB Dortmund has advanced to the semi-final of UEFA Champions League by beating Malaga. They could be drawn to face their German archrvial Bayern or Spanish powerhouses Real Madrid or FC Barcelona.

Update on December 2012:
BVB Dortmund had been drawn to face Shakhtar Donetsk for the 2012-2013 Champions League knockout round.

Update on August 2012:
Dortmund had been drawn into the same group for Champions League with Real Madrid, Man City (MCFC), and Ajax.

The Guide to BVB Dortmund Tickets

Considered among the leading clubs in German football, Borussia Dortmund has always remained a threat to its opponents owing to its enterprising playing style.

Ballspielverein Borussia Dortmund FC (BVB), founded in 1909, is a German sports club based in Dortmund, North Rhine-Westphalia and is best known as one of the most successful clubs in German football history. In addition to six German Bundesliga football championships and two DFB Pokal (German Cup) victories, Dortmund became the first German team to have won the European's Cup Winners' Cup in 1966, and the first historic UEFA Champions League crown in 1997.

As for shopping for BVB 09 football tickets in another languages: BVB Dortmund Fussballtickets, Billets de BVB Dortmund, and Billetter Dortmund.

SoccerTicketShop acts as an intermediary between buyers and ticket sellers (defined below) to facilitate the purchase and sale of Dortmund soccer match tickets, and as such is not directly involved in the actual ticket sale transaction between the buyers and TICKET SELLERS. All sales are final. As tickets sold through this SITE are often obtained through the secondary market and prices are determined by the individual ticket seller, the prices for tickets may be above or below face value.