Feyenoord tickets are available for sale. 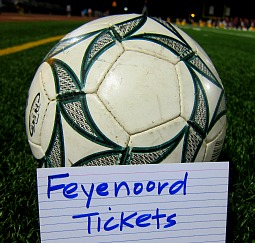 Price for the Feyenoord Rotterdam soccer tickets is shown in either EURO or GBP.

The Guide to Feyenoord Tickets

Feyenoord Rotterdam, currently one of Dutch professional football clubs located in Rotterdam since the day this football team was founded in 1908.

With Ajax and PSV, Feyenoord is one of the "big three" clubs in the Netherlands. One or another of these three clubs has won every Dutch League Championship since 1965 – with the exception of AZ '67's 1981 and 2009 titles and FC Twente's 2010 title – and they are, together with FC Utrecht and Roda JC, the only clubs never to have relegated from Dutch first division football.

SoccerTicketShop acts as an intermediary between buyers and ticket sellers (defined below) to facilitate the purchase and sale of Feyenoord football tickets or Dutch soccer match ticket, and as such is not directly involved in the actual ticket sale transaction between the buyers and TICKET SELLERS. All sales are final. As tickets sold through this SITE are often obtained through the secondary market and prices are determined by the individual ticket seller, the prices for tickets may be above or below face value.