Here is upcoming Fenerbahce schedule as below: 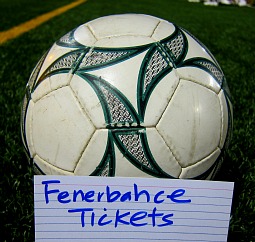 Price for the Fenerbahce FC tickets for Turkish SuperLig, UEFA Europa League and/or UCL is shown in EURO.

Fenerbahce Spor Kulubu, (Fenerbahce FC or Sports Club in English), founded in 1907, is one of Turkish professional football clubs based in Istanbul. Fenerbahce is one of the most successful and also one of the best supported soccer clubs. They are currently playing their home football matches at the Sukru Saracoglu Stadyumu (Stadium).

Below are these major achievements of Fenerbahce SK:

Fenerbahce had been able to reach UEFA Champions League quarterfinal (2008-09) and also had competed in CL for five times as well as Europa League for three times.

SoccerTicketShop acts as an intermediary between buyers and ticket sellers (defined below) to facilitate the purchase and sale of Fenerbahce football match tickets or Turkish soccer match tickets, and as such is not directly involved in the actual ticket sale transaction between the buyers and TICKET SELLERS. All sales are final. As tickets sold through this SITE are often obtained through the secondary market and prices are determined by the individual ticket seller, the prices for tickets may be above or below face value.