Here is upcoming AC Milan schedule as below: 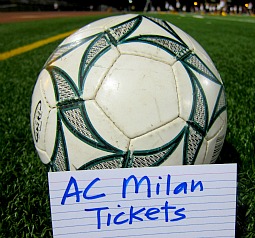 Price for AC soccer match tickets for Serie A, Coppa Italia, and Champions League (UCL) is shown in EURO.

The Guide to AC Milan Tickets

ACMilan's real name is called "Associazione Calcio Milan", is an Italian professional football club based in Milano, Lombardy. AC Milan is currently one of the most popular football clubs in Europe because of their successful records in UEFA Champions League history, also one of the most supported football clubs in Italy based on the research conducted by Italian newspaper La Repubblica. Historically, Milan was supported by the city's working-class and trade unionists, a section of whom were migrants from Southern Italy.

Found in 1899, AC Milan is scheduled to host home football matches at San Siro, also known as the Stadio Giuseppe Meazza. This football stadium is shared with their chief archrival Inter Milan, is the largest in Italian football with a total capacity of 80,074.

SoccerTicketShop acts as an intermediary between buyers and ticket sellers (defined below) to facilitate the purchase and sale of soccer match tickets in Milano, and as such is not directly involved in the actual ticket sale transaction between the buyers and TICKET SELLERS. All sales are final. As tickets sold through this SITE are often obtained through the secondary market and prices are determined by the individual ticket seller, the prices for tickets may be above or below face value.