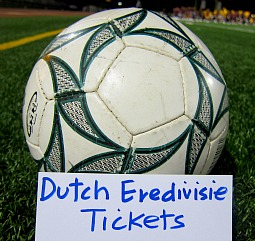 Price for the Dutch League soccer match tickets are shown in EURO.

The Guide to Dutch Eredivisie Tickets

About Dutch Eredivisie:
Eredivisie is the highest level professional football league in Netherlands (Holland) since 1956. is recognised by UEFA and current ranked 7th for the best football league in Europe. Ajax Amsterdam is the current leading football club to record 23 Eredivisie championship titles, PSV ranked seconds with 18 titles and Feyenoord ranked third with 9 titles. AZ Alkmaar have won 2-time. FC Twente and FC FC Utrecht have won one title each.

SoccerTicketShop acts as an intermediary between buyers and ticket sellers (defined below) to facilitate the purchase and sale of Dutch League football tickets, and as such is not directly involved in the actual ticket sale transaction between the buyers and TICKET SELLERS. All sales are final. As tickets sold through this SITE are often obtained through the secondary market and prices are determined by the individual ticket seller, the prices for tickets may be above or below face value.