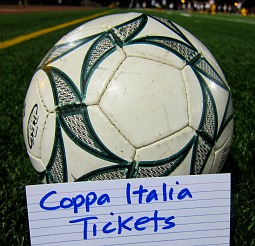 Price for the Italian Tim Cup soccer match tickets is shown in either EURO or GBP..

The Guide to Coppa Italia Tickets

If anybody wins Coppa Italia championship, then they could play in the UEFA Europa League competition. The results in Coppa Italia had been unpredictable for years!

As for the end of 2010-2011 Italia soccer season both AS Roma and Juventus currently lead the most Coppa Italia championships (total 9 titles), but AS Roma have appeared in Coppa Italia final championship matches.

Find out about biglietti Coppa Italia.

SoccerTicketShop acts as an intermediary between buyers and ticket sellers (defined below) to facilitate the purchase and sale of Italian Cup match tickets, and as such is not directly involved in the actual ticket sale transaction between the buyers and TICKET SELLERS. All sales are final. As tickets sold through this SITE are often obtained through the secondary market and prices are determined by the individual ticket seller, the prices for tickets may be above or below face value.