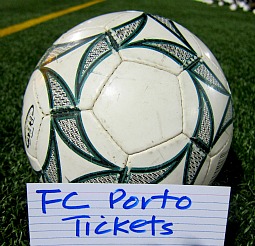 Update on August 2013:
FC Porto had been drawn into the same group for Champions League with Atletico Madrid, Zenit and Austria Wein.

Update on December 2012:
FC Porto had been drawn to face Malaga for the 2012-2013 UEFA Champions League knockout round.

Update on August 2012:
Porto had been drawn into the same group for Champions League with Dinamo Zagreb, PSG and Dynamo Kiev.

FC Porto (Futebol Clube do Porto) is a Portuguese football club which currently holds the best European record by a Portuguese team, having won the Intercontinental Cup and the UEFA Champions League (European Cup) twice each, the Portuguese Cup 13 times and Portuguese Super cup 15 times!

FC Porto is one of the founding members of "G-14 European Football Clubs Grouping" and is extensively acknowledged in the present football panorama. Porto currently hosts their home football matches at Estadio do Dragao.

FC Porto players and their fans are often called as Dragões (The Dragons) / Azuis e Brancos (Blue and White). FC Porto Football Club has now representation all over the country and all across the world.

Benfica had been Porto's chief archrival for years. Tickets for football match between Benfica and Porto are not easy to get!

Porto vs Sporting Lisabon tickets are still so high demands too!

If you wish to shop for FC Porto football tickets in French or look for billetterie FC Porto, visit Billets de FC Porto.

As for Porto tickets in Spanish, visit Entradas FC Porto.

As for tickets for Porto in Portugues, visit Bilhetes FC Porto.

SoccerTicketShop acts as an intermediary between buyers and ticket sellers (defined below) to facilitate the purchase and sale of FC Port football match tickets, and as such is not directly involved in the actual ticket sale transaction between the buyers and TICKET SELLERS. All sales are final. As tickets sold through this SITE are often obtained through the secondary market and prices are determined by the individual ticket seller, the prices for tickets may be above or below face value.