Schalke 04 tickets are available for sale. Price for the S04 football match tickets is shown in EURO or GBP.

Here is upcoming FC Schalke 04 match schedule (timetable) as below: 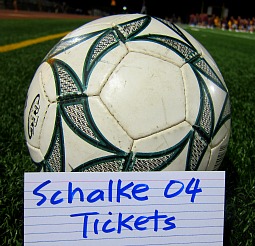 Update on August 2013:
Schalke 04 had been drawn into the same group for Champions League with Chelsea FC, Basel and Steaua Bucharesti.

Update on December 2012:
Schalke 04 had been drawn to face Galatasaray for the 2012-2013 UEFA Champions League knockout round.

Update on August 2012:
Schalke 04 had been drawn into the same group for Champions League with Arsenal FC, Olympiacos and Montpellier.

Fußball-Club Gelsenkirchen-Schalke 04 or FC Schalke 04, found in 1904, is a German professional football club originally from the Schalke district of Gelsenkirchen, North Rhine-Westphalia.

Football match tickets for Schalke vs Borussia Dortmund or Bayern Munich or Bayer Levekusen at the Veltins Arena will be selling out sooner or later! Please don't wait!

As for S04 tickets in another language: fussballtickets (German).

SoccerTicketShop acts as an intermediary between buyers and ticket sellers (defined below) to facilitate the purchase and sale of German football match tickets, and as such is not directly involved in the actual ticket sale transaction between the buyers and TICKET SELLERS. All sales are final. As tickets sold through this SITE are often obtained through the secondary market and prices are determined by the individual ticket seller, the prices for tickets may be above or below face value.