Here is upcoming Malaga CF schedule as below: 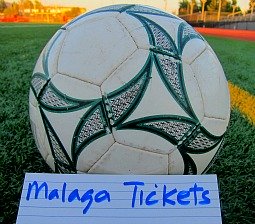 Price for the Malaga FC tickets is shown in EURO.

Update on December 2012:
Malaga had been drawn to face FC Porto for the 2012-2013 UEFA Champions League knockout round.

Update on August 2012:
Malaga had been drawn into the same group for Champions League with AC Milan, Anderlecht and Zenit St Petersburg.

The Guide to Malaga CF Tickets

Málaga CF is generally seen as the heir of CD Málaga, one of the most historical Andalusian football clubs, by being a near-identical looking football club that even shares the same fanbase and traditions, although in legal terms it's a different entity with a separate register and another founding date, the one of its former reserve team, Atlético Malagueño.

If you wish to shop for FC Malaga tickets in Spanish, visit entradas para Malaga CF.