Here is upcoming ACF Fiorentina schedule as below: 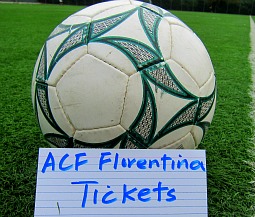 Price for the Fiorentina soccer match tickets is shown in EURO.

AC Fiorentina (ACF), is a professional Italian football club from Florence, Tuscany. Founded in 1926, Fiorentina is also nicknamed as Viola or Gigiliati which means purple and lilies respectively. Also Florence still has been one of the most popular tourist attractions in Italy. Their home stadium is called the Stadio Artemio Franchi, which currently fill 47,000 soccer fans.

Find out about Biglietti ACF Fiorentina.

SoccerTicketShop acts as an intermediary between buyers and ticket sellers (defined below) to facilitate the purchase and sale of Italia football match tickets, and as such is not directly involved in the actual ticket sale transaction between the buyers and TICKET SELLERS. All sales are final. As tickets sold through this SITE are often obtained through the secondary market and prices are determined by the individual ticket seller, the prices for tickets may be above or below face value.