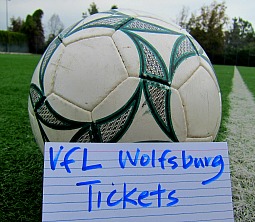 Price for the Wolfsburg FC soccer tickets is shown in EURO.

The Guide to VfL Wolfsburg Tickets

VfL Wolfsburg, one of the German professional football clubs located in Wolfsburg since this club was found in 1945. This Wolfsburg town is known as the place where Volkswagen factory workers live. Of course, Wolfsburg football club is currenly owned by the Volkswagen Group.

Bundesliga Championship crown (2008 - 2009) was their only major achievements. And Wolfsburg made trip to DFB Pokal Cup final in 1995, unfortuately they lost to Borussia Mönchengladbach.

Football tickets for Wolfsburg vs Bayern Munich, BVB Dortmund or Bayer 04 at the Volkswagen Arena should be very high in demands! Shop now and buy this exciting football match tickets!

SoccerTicketShop acts as an intermediary between buyers and ticket sellers (defined below) to facilitate the purchase and sale of Wolfsburg football match tickets, and as such is not directly involved in the actual ticket sale transaction between the buyers and TICKET SELLERS. All sales are final. As tickets sold through this SITE are often obtained through the secondary market and prices are determined by the individual ticket seller, the prices for tickets may be above or below face value.