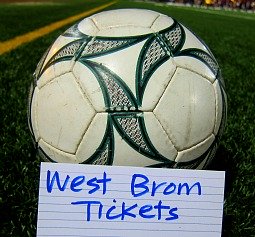 Note: Price for the WBA football match tickets is shown in either GBP or EURO. There are no hidden booking fees, no service charges and no other fees but the shipping charge which is sometimes free when self collection is available.

Update on November 2012:
WBA had been so surprising team during the 2012-2013 Premier League season, they are standing fourth behind Man United, Man City and Chelsea in the EPL standing by 25th November, but are currently standing above another powerhouses Arsenal FC and Liverpool FC. Buy WBA football tickets and root for WBA at the Hawthorns.

The Guide to West Brom Tickets

West Bromwich Albion Football Club, also known as West Brom or WBA, or The Baggies, The Throstles, are an English professional football club based in West Bromwich, West Midlands. The club was founded in 1878 by a group of workers from the Salter's Spring Works in West Bromwich, and have played their home football matches at The Hawthorns since 1900.

West Brom have had more success in the FA Cup with five wins.

They traditionally engages the important rivalries with Aston Villa, as well as have "Black Country Derby" football matches with Wolverhampton Wanderers.

You should be aware that tickets for WBA vs Man Utd, Man City, Chelsea FC, Arsenal FC or Liverpool FC at the Hawthorns always had been very higher in demands.

SoccerTicketShop acts as an intermediary between buyers and ticket sellers (defined below) to facilitate the purchase and sale of English football match tickets in U.K., and as such is not directly involved in the actual ticket sale transaction between the buyers and TICKET SELLERS. All sales are final. As tickets sold through this SITE are often obtained through the secondary market and prices are determined by the individual ticket seller, the prices for tickets may be above or below face value.