Sunderland FC tickets are available for sale. Price for the SAFC football match tickets is shown in either GBP or EURO.

Here is upcoming Sunderland A.F.C. match schedule (fixtures) as below: 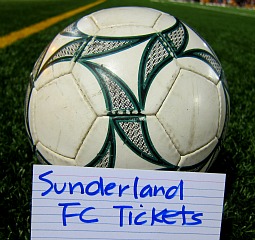 Sunderland Association Football Club (SAFC), is one of English professional football clubs based in Sunderland, Tyne and Wear since this football club was found in 1879. The nickname of Sunderland FC is called "black cats". their current home football match venue is called "Stadium of Light".

Sunderland was known for becoming the first Second Division side to win the 1973 FA Cup title over Leeds United, it was one of the biggest upsets in the history of the FA Cup competition in England.

Sunderland's major achievement as for the end of 2012 season as below:

PayPal MasterCard or credit card or debit card is accepted for your event ticket purchases.

SoccerTicketShop acts as an intermediary between buyers and ticket sellers (defined below) to facilitate the purchase and sale of Sunderland soccer tickets, and as such is not directly involved in the actual ticket sale transaction between the buyers and TICKET SELLERS. All sales are final. As tickets sold through this SITE are often obtained through the secondary market and prices are determined by the individual ticket seller, the prices for tickets may be above or below face value.