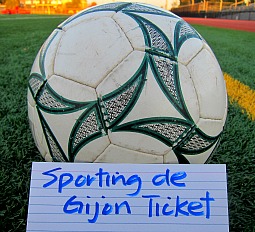 Note: Price for the Sporting de Gijon soccer match tickets for La Liga or Cope del Rey is shown in either EURO or GBP.

The Guide to Sporting Gijon Tickets

Real Sporting de Gijón, S.A.D., is one of the Spanish professional football clubs from Gijón, Asturias. Founded in 1905, they currently compete in Spanish La Liga. Known as Rojiblancos because of their red and white striped jerseys, their home football match venue is El Molinón stadium, the oldest professional football stadium in Spain since 1908.

Sporting de Gijón is the sixth-oldest club in La Liga as for the end of season 2010-11. This football club ranks 15th in the official All-Time La Liga table and currently is one out of nine clubs in Spanish football to have never played below the second division.

Of course, PayPal mastercard or credit card or debit card is accepted for your event ticket purchases.

If you wish to shop for this football club match tickets in Spanish, visit boletos Sporting de Dijon.

SoccerTicketShop acts as an intermediary between buyers and ticket sellers (defined below) to facilitate the purchase and sale of Spanish soccer event tickets, and as such is not directly involved in the actual ticket sale transaction between the buyers and TICKET SELLERS. All sales are final. As tickets sold through this SITE are often obtained through the secondary market and prices are determined by the individual ticket seller, the prices for tickets may be above or below face value.