Here is upcoming Southampton Saints schedule (fixtures) as below: 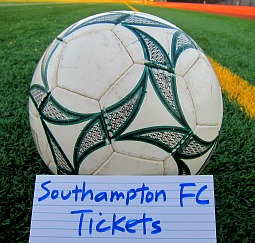 Price for the Saints FC tickets is shown in either GBP or EURO.

The Guide to Southampton FC Tickets

Southampton FC, known as Saints, is one of the English professional football clubs is located in city of Southampton (Southern Hampshire), found in 1885, they are known to be called "Saints" as their nickname; they are currently playing home football matches at the St Mary's Stadium.

Note: Tickets for Man Utd or Manchester City or Arsenal or Chelsea or Liverpool vs Southampton at St Marys stadium should be very high in demand, you better shop now and buy this football match tickets online.

SoccerTicketShop acts as an intermediary between buyers and ticket sellers (defined below) to facilitate the purchase and sale of English football match tickets in U.K., and as such is not directly involved in the actual ticket sale transaction between the buyers and TICKET SELLERS. All sales are final. As tickets sold through this SITE are often obtained through the secondary market and prices are determined by the individual ticket seller, the prices for tickets may be above or below face value.