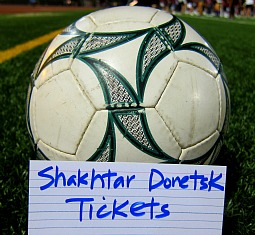 Note: Prices for the SHK soccer match tickets for UCL or Europa league are shown in EURO.  There are no hidden booking fees, no service charges and no other fees but the shipping charge which is sometimes free when self pick-up is available.

Update on August 2013:
Shakhtar Donetsk had been drawn into the same group for Champions League with Manchester United, Bayer Leverkusen and Real Sociedad.

Update on December 2012:
Shakhtar Donetsk had been drawn to face BVB Borussia Dortmund in the 2012-2013 Champions League (CL) knockout round.

Update on August 2012:
Shakhtar Donetsk had been drawn into the same group for Champions League with Chelsea, Juventus and FC Nordsjaelland.

The Guide to Shakhtar Donetsk Tickets

FC Shakhtar Donetsk (SHK), is a Ukrainian professional soccer club, playing in the city of Donetsk, Ukraine. Shakhtar has appeared in several European competitions and currently is often a participant of the UEFA Champions League. The club became the first Ukrainian club to win the UEFA Cup in 2009.

The clubs draws its history from the very start of the Soviet football league competitions and is one of the oldest clubs in Ukraine. The club was a member of the Soviet Voluntary Sports Society of Shakhtyor having connections with other Soviet teams from Karaganda (Kazakhstan), Soligorsk (Belarus) etc. The Donetsk-based club became culturally entwined with the heavily industrialized and Russified region of Ukraine, Donets Basin, better known as the Donbass hence the name of its stadium.

In the late Soviet period Shakhtar was considered a tough mid-table club of the Soviet Top League and a cup competition specialist after winning the Soviet Cup two years in the row (1961 and 1962).

For sometime being considered as the second best Ukrainian club after Dynamo Kyiv, with the turn of millennium Shakhtar is breaking stereotypes after earning its national as well as European honors.

SoccerTicketShop acts as an intermediary between buyers and ticket sellers (defined below) to facilitate the purchase and sale of Shakhtar Donetsk tickets, and as such is not directly involved in the actual ticket sale transaction between the buyers and TICKET SELLERS. All sales are final. As tickets sold through this SITE are often obtained through the secondary market and prices are determined by the individual ticket seller, the prices for tickets may be above or below face value.