Here is upcoming Sevilla FC schedule as below: 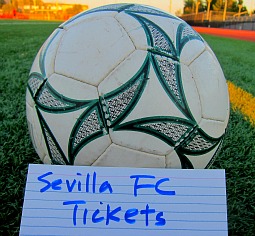 Price for the Sevilla soccer match tickets is shown in EURO.

Sevilla Football Club, known as Sevilla FC, or “The Sevillistas”, a Spanish professional football club based in Seville since they were found in 1905.

Sevilla FC has proven excellent football records since 1945, here's major achievements of Sevilla FC as below:

Tickets for Sevilla vs Real Madrid or FC Barcelona at the Estadio Ramon Sanchez Pizjuan should be so high in demands!

SoccerTicketShop acts as an intermediary between buyers and ticket sellers (defined below) to facilitate the purchase and sale of Sevilla soccer match tickets or MLS ticket or Major League soccer tickets, and as such is not directly involved in the actual ticket sale transaction between the buyers and TICKET SELLERS. All sales are final. As tickets sold through this SITE are often obtained through the secondary market and prices are determined by the individual ticket seller, the prices for tickets may be above or below face value.