Here is upcoming Unione Calcio Sampdoria schedule as below: 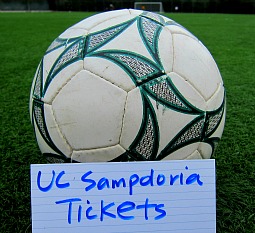 Note: Price for the Sampdoria football match tickets is shown in EURO. There are no hidden booking fees, no service charges and no other fees but the shipping charge is sometimes free when self collection is available.

The Guide to UC Sampdoria Tickets

U.C. Sampdoria stands for Unione Calcio Sampdoria, is one of the Italian professional football clubs located in Genoa, they currently compete in the Serie A League.

Found in 1946 from the merger of another two existing sports clubs, Sampdoria's traditional home game colors are royal blue / white shirts and white shorts with royal blue socks. Their home match venue is about 36,500 capacity Stadio Luigi Ferraris in Genoa.