Here is upcoming Rubin Kazan match schedule (fixtures) as below: 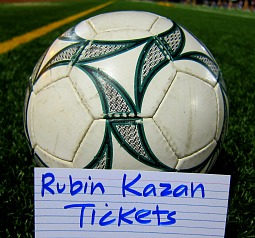 Note: Price for the Rubin Kazan football match tickets is shown in EURO. There are no hidden booking fees, no service charges and no other fees but the shipping charge is sometimes free when self collection is available.

FC Rubin Kazan, is a Russian professional football club based in the city of Kazan within Tatarstan area.

Rubin Kazan had been competing in either Champions League or Europa competitions since the beginning of 2004-2005 season.

Rubin is known as one of the most popular football clubs in Russia because they have the largest fan bases everywhere in Russian cities.

SoccerTicketShop acts as an intermediary between buyers and ticket sellers (defined below) to facilitate the purchase and sale of Rubin Kazan tickets, and as such is not directly involved in the actual ticket sale transaction between the buyers and TICKET SELLERS. All sales are final. As tickets sold through this SITE are often obtained through the secondary market and prices are determined by the individual ticket seller, the prices for tickets may be above or below face value.