Maccabi FC tickets are available for sale. Price for MTAFC football match tickets is shown in EURO or GBP. 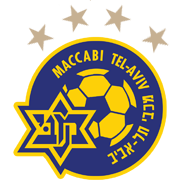 Here is upcoming Maccabi Tel Aviv match schedule as below:

Maccabi Tel Aviv football club (MTAFC) is originally found in 1906, their nickname is Maccabi or The Yellows, had been known as one of Israeli professional football clubs located in Piraeus, and also the oldest football club in Israel.

Maccabi is the most successful club in Israeli football history, having won 21 Israeli Premier League titles, 23 Israeli State Cups and 5 Israeli SuperCups, more titles than any other Israeli teams,  and one of three teams that have never been relegated from the first division and ever made it to UEFA Champions League competitions.

Whenever European giants like FCB, Real Madrid, Bayern Munich and/or Man Utd come to Bloomfield Stadium for UCL matches, these football match tickets would be very higher demand for sure!