Here is upcoming Hertha Berlin football schedule as below: 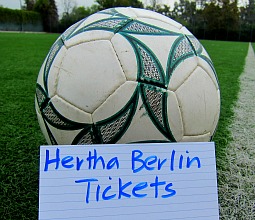 Price for the Hertha BSC soccer match tickets is shown in EURO.

The Guide to Hertha Berlin Tickets

Hertha Berliner Sport-Club von 1892, currently known as Hertha BSC or Hertha Berlin, their nickname is called "Die Alte Dame", is one of the German professional football clubs based in Berlin.

A founding member of the German Football Association in Leipzig in 1892, the club has a long history as Berlin's best-supported side. Hertha Berlin had been playing in the 2. Bundesliga, but already returned to the 1. Fußball-Bundesliga, Germany's top professional league for the 2011-12 season.

SoccerTicketShop acts as an intermediary between buyers and ticket sellers (defined below) to facilitate the purchase and sale of Hertha Berlin football match tickets, and as such is not directly involved in the actual ticket sale transaction between the buyers and TICKET SELLERS. All sales are final. As tickets sold through this SITE are often obtained through the secondary market and prices are determined by the individual ticket seller, the prices for tickets may be above or below face value.