Hannover 96 tickets are available for sale. 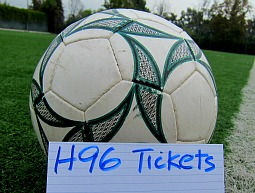 Price for the H96 soccer match tickets is shown in EURO.

Hannoverscher Sportverein von 1896, their nickname is Hannover 96 or H96, is one of the German professional football clubs based in the city of Hanover, Lower Saxony. Hannover 96 is known as one of the oldest football club in Germany since they were found in year 1896.

Soccer match tickets for Hannover vs Bayern Munich or Bayer 04 or Borussia Dortmund at the HDI stadium should be very higher in demand. Please don't wait and shop now for this exciting football tickets!

SoccerTicketShop acts as an intermediary between buyers and ticket sellers (defined below) to facilitate the purchase and sale of German football match tickets, and as such is not directly involved in the actual ticket sale transaction between the buyers and TICKET SELLERS. All sales are final. As tickets sold through this SITE are often obtained through the secondary market and prices are determined by the individual ticket seller, the prices for tickets may be above or below face value.