Here is upcoming Granada soccer schedule as below: 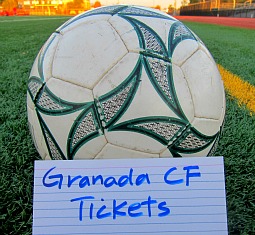 Price for the Granada FC tickets is shown in either EURO or GBP.

The Guide to Granada CF Tickets

Granada Club de Fútbol is a Spanish football club based in Granada, in the autonomous community of Andalusia. Founded in 1931, they currently compete in La Liga. Their current home soccer venue is called "Estadio Nuevo Los Cármenes".

Granada was the third Andalusian football team after Sevilla FC and Real Betis to compete in La Liga before the 1941–42 season.

SoccerTicketShop acts as an intermediary between buyers and ticket sellers (defined below) to facilitate the purchase and sale of soccer event tickets in Spain, and as such is not directly involved in the actual ticket sale transaction between the buyers and TICKET SELLERS. All sales are final. As tickets sold through this SITE are often obtained through the secondary market and prices are determined by the individual ticket seller, the prices for tickets may be above or below face value.