Here is upcoming FC Koln match schedule as below: 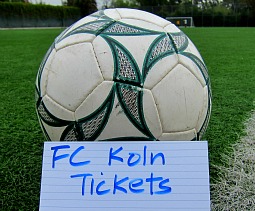 Price for the FC Cologne football match tickets is shown in EURO.

FC Koln, known as FC Cologne, is one of the German professional football clubs based in Cologne near the famous river Rhine, and found in 1948, their famous nickname is "Die Geissbocke" which means we call "The Billy Goats" in English.

They currently compete in Bundesliga and play their German League football matches at their home venue called RhinEnergie Stadion.