RCD Espanyol tickets are available for sale. Price for the RCDE soccer match tickets is shown in EURO. 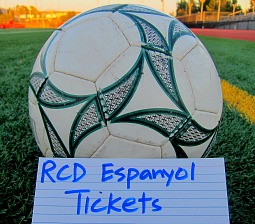 Note: There are no hidden booking fees, no service charges and no other fees but the shipping charge is sometimes free when self collection is available

The Guide to RCD Espanyol Tickets

Although RCD Espanyol is only the sixth most popular football club in Spain and is often overshadowed by the powerhouse FC Barcelona, the Espanyol football team has a legion of devoted fans and is having a great season this year.

Tickets to Espanyol football matches would be going fast as the team packs in 55,000 spectators each game at the Cornella-El Prat Stadium in City of Barcelona. Next year, RCD Espanyol is getting a new stadium that will hold even more spectators and fans. Espanyol is eligible for the UEFA Europa League cup this year and played for the cup last year. Fans of the football team are buying tickets in hopes of seeing their team win the UEFA Cup this year.

Because the RCD Espanyol is so popular in Spain and has been such a successful team, fans usually pack into the stadium to watch them play. Tickets are usually sold out in advance for football matches for this club.

As for the RCDE tickets in Spanish, visit Boletos para RCD Espanyol.