Here is upcoming Dynamo Kiev schedule (timetable) as below: 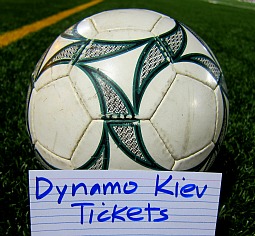 Price for the Dynamo Kyiv soccer match tickets is shown in EURO.

Update on August 2012:
Dynamo had been drawn into the same group for Champions League with FC Porto, Paris St Germain (PSG), and KievDinamo Zagreb.

The Guide to Dynamo Kiev Tickets

Here are Dynamo Kiev's major achievement records before splitting from Soviet Union in 1991 as below:

You can see why Dynamo Kiev is considered as one of the strongest football teams in Ukraine.

Dynamo Kiev was so close to reach Champions League Final, unfortuately they lost to Bayern Munich.

European giants like Barcelona, Real Madrid or Man Utd still view a trip to Olimpiysky for Champions League or Europa League very difficult because it's not that easy to beat Dynamo Kiev under unpredictable climate in Ukraine.

SoccerTicketShop acts as an intermediary between buyers and ticket sellers (defined below) to facilitate the purchase and sale of Ukraine football match tickets, and as such is not directly involved in the actual ticket sale transaction between the buyers and TICKET SELLERS. All sales are final. As tickets sold through this SITE are often obtained through the secondary market and prices are determined by the individual ticket seller, the prices for tickets may be above or below face value.