Here is upcoming Dinamo Zagreb soccer schedule as below: 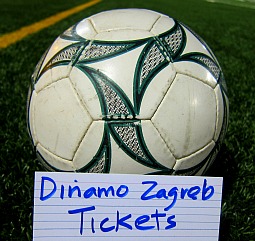 Price for the Dinamo Zagreb football match tickets is shown in EURO.

Note: There are no hidden booking fees, no service charges and no other fees but  shipping charge which is sometimes free when self collection is available.

Update on August 2012:
Dinamo Zagreb had been drawn into the same group for Champions League with Porto, PSG and Dynamo Kiev.

The Guide to Dinamo Zagreb Tickets

GNK Dinamo Zagreb, commonly known as Dinamo Zagreb, or by their nickname The Blues (Croatian: Modri) are a Croatian professional football club based in Zagreb. They currently play their home matches at Stadion Maksimir. They are the most successful club in Croatian football history, having won twelve Croatian Championship Titles, ten Croatian Cups and four Croatian Supercups. The club has spent its entire existence in top flight, having been members of the Yugoslav First League from 1946 to 1991, and then the Prva HNL since its foundation in 1992.

The team's traditional colour is royal blue, which has been replaced for European matches in recent times with the darker navy blue. The club's biggest rivals are Hajduk Split, and matches between the two teams are referred to as "Eternal Derby". Dinamo are currently the reigning Croatian champions having won their sixth consecutive Prva HNL title in the 2010–2011 season.

SoccerTicketShop acts as an intermediary between buyers and ticket sellers (defined below) to facilitate the purchase and sale of soccer match tickets in Croatia, and as such is not directly involved in the actual ticket sale transaction between the buyers and TICKET SELLERS. All sales are final. As tickets sold through this SITE are often obtained through the secondary market and prices are determined by the individual ticket seller, the prices for tickets may be above or below face value.