Here is upcoming FC Girondins de Bordeaux schedule as below: 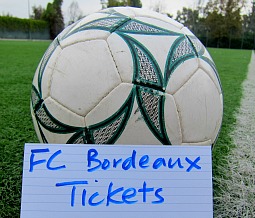 Price for the FCGB match tickets is shown in EURO.

The Guide to Bordeaux FC Tickets

FC des Girondins de Bordeaux, known as FCGB, is one of the French professional football clubs  located in Bordeaux, France. They currently compete in French Ligue 1, the first division of French football, and won its last Ligue 1 title in the 2008–09 season. Bordeaux was founded in 1881 as a multi-sports club and is one of the most successful football clubs in France.

Bordeaux currently plays their home football matches at the Nouveau Stade de Bordeaux (former Stade Chaban Delmas), which could fill 42,000 seats. This venue will be used for one of UEFA Euro 2016 football sites.

Bordeaux is currently one of the popular football clubs with Marseille, Lyon and Paris Saint Germain (PSG) in France.

PayPal MasterCard or credit card or debit card is accepted for your event ticket purchases.

As for Bordeaux soccer match tickets in French -- find out about billets FC Bordeaux.

SoccerTicketShop acts as an intermediary between buyers and ticket sellers (defined below) to facilitate the purchase and sale of French league soccer match tickets, and as such is not directly involved in the actual ticket sale transaction between the buyers and TICKET SELLERS. All sales are final. As tickets sold through this SITE are often obtained through the secondary market and prices are determined by the individual ticket seller, the prices for tickets may be above or below face value.