Here is upcoming Bologna FC schedule as below: 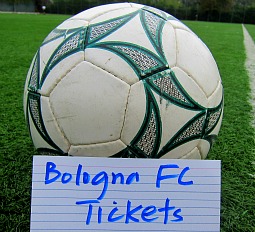 Price for the BFC football match tickets is shown in EURO.

The Guide to Bologna FC Tickets

Bologna Football Club 1909, known as Bologna (BFC), an Italian Football League club based in Bologna, Emilia-Romagna, formed in 1909. The club are nicknamed the rossoblù because of the red and blue striped shirts they wear. Red and Blue are the official colours of the town. During its history the club has won the Italian League Championship seven times. They are the sixth most successful team in the league ever.

Bologna FC home football venue is Stadio Renato Dall'Ara, which is the biggest sports building of Bologna and its name is taken from the ex-president of club Renato Dall'Ara, who died three days before the final for Serie A's Scudetto. This football stadium can fill approx. 38,279 fans.

SoocerTicketShop acts as an intermediary between buyers and ticket sellers (defined below) to facilitate the purchase and sale of Bologna soccer match tickets, and as such is not directly involved in the actual ticket sale transaction between the buyers and TICKET SELLERS. All sales are final. As tickets sold through this SITE are often obtained through the secondary market and prices are determined by the individual ticket seller, the prices for tickets may be above or below face value.